If you are an SLP then you know how to work with minimal pairs (words that differ by only one sound), so here is a quick refer, and for parents, here it goes!

Using minimal pairs is an effective and quick way to help your child break their speech habit of substituting a sound for another sound (often seen with the phonological processes of fronting t>k and stoping p>f) or omitting the end sounds of words, etc. The goal of using minimal pairs is for your child to understand that how they say a word determines the meaning.

Find photos of the target word and the pair online, you can find pictures already put together by searching “minimal pairs”. 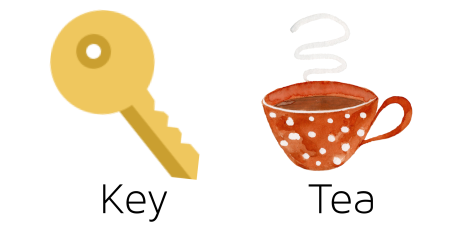 Once you have established about 80% accuracy for the child identifying the words as you say them, you are ready to move on.

Gently tape or set the pictures (working in pairs) on the bottom of an upside-down bowl or cup and place a highly desired object (sticker, penny, M&M, etc.) under one cup (75% of the time you want to put the object under the word with the target sound).

Now have the child verbally guess (by labeling the picture) which cup the object is under (cue: “using only your words, guess where the sticker/M&M/etc. is”). Don’t let them pick the cup up or point, they must use verbally label their guess.

You only pick up the cup/bowl that directly matches the word your child said, for example – even if they mean “boat” but say “bow,” you pick up “bow.”

To help pull back from verbal prompts, using visual cues such as our Bjorem Speech Sound Cues, work really well and when you are out and about and don’t have the visual cues at your finger tips, try these hand cues for consonants! And check out our video example of a minimal pairs activity.

I’m Jen, a mom of 3 and a speech-​language pathologist that specializes in early intervention, Apraxia, and parent education. I am the owner of Children’s Therapy Services in Overland Park Kansas and the creator of the Bjorem Speech Sound Cues. I have a passion for educating families in the areas of child development, play, and of course, sensory play. This blog is about my experiences as a therapist, business owner, publisher, and as a mom. View all posts by bjoremspeech